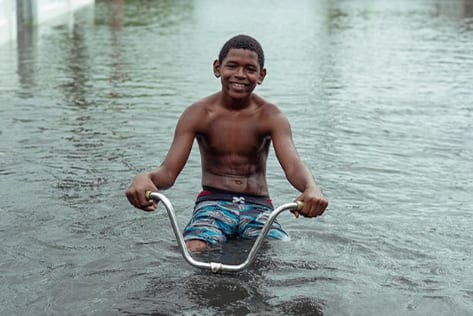 Just to keep you all in the loop about Tropical Storm Isaias affecting Puerto Rico last Wednesday. Even though the eye-wall didn’t land on the island, it brought tropical storm rains and winds causing severe flooding. This has been the biggest storm after Hurricane Maria, so it brought many memories about that, regardless it was nothing compared to the hurricane in 2017.
I wanted to share these pictures taken by Puerto Rican photographer Eric Rojas, this past week after Tropical Storm Isaias hit. The photos were taken in the municipality of Loíza, in the northeastern coast of the island, around 30 minutes from our host site in San Juan. We’ve had PDA volunteers working at several houses in this town.
What comes to your mind?

The caption in the second picture says: We are Puerto Rico, after Gaby’s picture (above) on his bike, he joined his friends who were fishing regardless of the situation in one of the streets after Rio Grande de Loíza flooded the community.
Their smiles in the midst of flooding, gives me hope.
Some additional numbers:
All this is a reminder of how vulnerable our land is in terms of facing storms and hurricanes. I am in communication with all Disaster Recovery Coordinators and Host Site Coordinators to see how we can support the most affected areas. Will keep you all posted.
Peace,